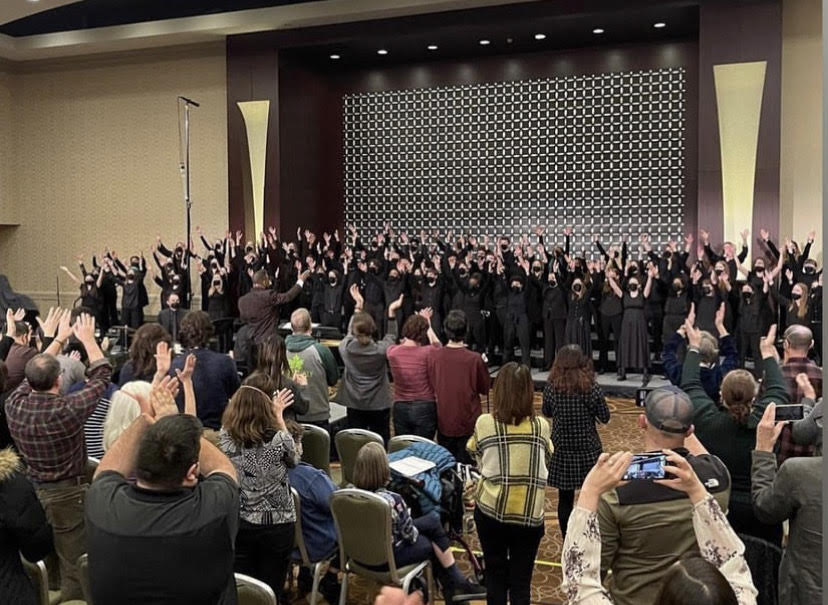 Eleven high school and three middle school students participated in a select honor choir on February 9th through 11th at the American Choral Director Association (ACDA) in Boston, Massachusetts. In order to be considered in the first place they had to submit video excerpts of music that they worked on with their chorus teacher and on their own. Once they made it in, though, they had to learn six pieces of music on their own before the big trip.

The ACDA honor choir is a program that allows the best choral singers at the high school level to be a part of audition choirs at different levels, from county to national. Each year a different city in the northeast is chosen to host the conference.. The All Eastern conference proudly sports singers from the Northeast, who are split into two different choirs: the honor choir and gospel choir. The honor choir is a larger group that learns a wide range of songs, but the second choir dedicates itself specifically to a genre chosen for that year. For both, students send an audio performance track for their voice part (soprano, alto, tenor and base) and hope for success. If selected, they are asked to learn six songs using a set of rehearsal tracks from ACDA.

In a proud moment for the Hen Hud choral department, every student who auditioned made it into the gospel choir. This is even more impressive when we learn that all of our high schoolers who tried out made up a great portion of the 78 members, more than any other school, and even some states.

The students arrived on Wednesday and checked in, all receiving a lanyard and a t-shirt. The lanyard was proof of vaccination and for security reasons, and the shirt was a keepsake with the Boston skyline on it. They sang a “part check” for one of the choral directors that was helping out to make sure that everyone had learned the songs ahead of time.

The director, Reverend Doctor Raymond Wise, is a preacher and a musician, personally composing two of the pieces in the repertoire. He instantly gained everyone’s favor with his energy and demeanor. Attendees reported that the feeling of singing among a group of spectacular singers was incredible.

The next two days were roughly the same.  Students woke around seven in the morning, and then headed down to a full breakfast of orange juice and Lucky Charms, and then filed gradually into the practice room. After practicing for three to four hours they went to lunch with the group at a selected restaurant. Once the lunch break was over, they returned to the practice room, rehearsing again with the ever-energetic Dr. Wise. On Thursday they rehearsed for a couple of hours, trying to build up as many fine-tuned details as possible in each song, but on Friday they didn’t rehearse, because it was time for the performance.

The performance was one an incredible experience. The students sang last, after a choir of teachers, and five out of six songs garnered standing ovations. Everyone on stage was professional, and yet managed to have fun singing and moving in a gospel manner. During the third song, the students’ section of the other choir in the back stood up and danced to the music. Dr. Wise then told the audience that they were allowed to sing along in certain parts, and they could move and dance whenever they felt the urge. Almost instantly, the entire concert hall was on their feet, swaying and clapping to the music. To quote Student President Daniel Saleem, it was like a “rock concert,” and the connection between singers and audience was palpable.